Special Needs Parenting :: It Is All Fun and Games (until it is not) by Carey Nelson Handley 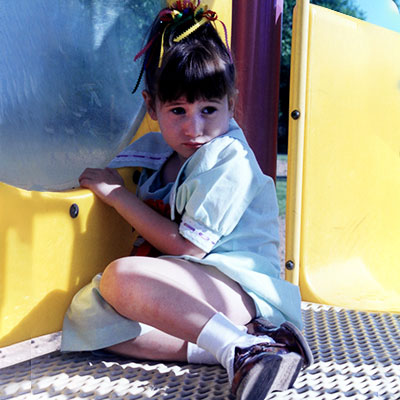 Today, I drove by the elementary school my daughter attended for a few short years. Memories came back quickly - one after the other. The great first year where the principal made sure we had everything we needed for our daughter to succeed, the horrid second year with a new principal who called my child “unique” and said they “didn’t have any other children like her in the school.” The truncated third year where we pulled her out of the school in the third month, never to set foot back in public school again.

And, then there was the playground which brought back other memories I’d just as soon keep buried. I recalled parking down the road a bit and watching her at recess, seeing her stay away from other children and walk aimlessly, trying to engage teachers in conversation because her peers shunned her at the beginning of the school year. The second year principal was apparently right: they really didn’t have other children like her. I tried to see her uniqueness as a positive as I’d been taught all my life but suddenly, and still to this day, the word “unique” makes me cringe.

I’ve always tried to look at the positives in life. I can trace back to this period where she preferred the companionship of her teachers and see how this led to her comfort when she accompanies me to business meetings or networking functions. She learned early on how to relate to adults and, even though adult conversations were frequently beyond her scope of understanding (and she was shielded from more inappropriate discussions), I see how she can hold her own in a room full of adults. Even though she is technically one of them at age 27, her conversation skills are years younger. Still, she has a way of endearing herself to others.

What she has really never learned to do is relate to her peers - chronological or true peers. Her chronological peers are grown and many have been through college, marriage and childbearing. She has nothing in common with the girls from her class in nursery or elementary school. I watch her struggle to fit in socially and have to encourage her to call other girls from her work programs. This was an unfortunate result from those days being ostracized by her same age peers and, a natural consequence of her having Special Needs. She never learned the art of peer communication during her formative years and no amount of coaxing her to call a friend would tell her what to say when she did make the call. I’d sit next to her with the phone on speaker, feeding her topics and cues of what to discuss. It never really stuck. Get her on the phone with her grandmother and she was a whole different person - one who knew what to say and how to respond. It’s just unfortunate that this doesn’t translate to true peers.

She’s not isolated and so I keep hoping that her work programs and social activities with those very much like her will give her the momentum to learn to listen and to respond. I want her to want to make those phone calls without prompting and to know how to carry on a conversation that goes beyond the surface.

I think back to my own childhood which was so very different than hers. I’d spend hours on the phone, probably talking about nothing in particular but there was an art to the conversation. I’m not sure how to teach that and I’m equally not sure if it would make a difference at this late stage. She’s been through social skills classes and functions. We’ve discussed that having a friend means being a friend which means phone calls and communication. I still have to suggest outings and make the arrangements with other parents. I suspect it will always be this way. The truth is that it seems to bother me more than it bothers her. It’s hard not to compare the things that bring us joy in our lives with those that make our children happy. It’s hard to know if they think they are missing out on the things we’re taught create meaningful lives. Perhaps it’s the simple things that give them the most pleasure. And, maybe that’s enough.