Special Needs Parenting :: On Being Normal, by Carey Handley 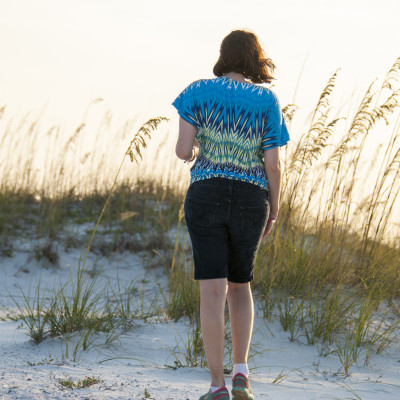 Last week, for the second time in my daughter’s 24 years, she asked me why she couldn’t be Normal. Having been through this conversation half her life ago, I was able to reach into what’s left of my memory and recollect what it was I had told her the first time.

My daughter was 12 the first time this particular subject came up and I had been completely unprepared for this discussion. It also broke my heart to hear this come out of her beautiful mouth. I suppose I had thought that if I treated her like any other child, one without Special Needs, we’d never have to have this conversation. How wrong I was.
Never having been known for my quick thinking (I’m one of those who thinks of the grandest, most clever, funniest things to say...after the fact), I scrambled to think of how to handle her question in a way that would acknowledge her emotions without compounding them. I said the first thing that came into my head which was, “Nobody’s normal.”
I tasted that statement for a nanosecond and thought it sounded profound. At least I convinced myself that it was profound.
I went on to explain that everybody has something and that there isn’t a person in the world who was perfect. Everybody. Has. Something.
I further explained that I had suffered from depression and anxiety at one time, that her grandmother broke her femur a few years back and now has pain and a little limp from time to time. I went on to point out difficulties that other members of her inner circle experienced. I told her that everybody has something about themselves that they either don’t like or want to improve.
I asked her what it was that she felt wasn’t “Normal” about herself. She told me she has Dyslexia and other things. Once I had her articulate this, it was easy to turn it around.
Every morning, my daughter reads to me. Many people think that Dyslexia means that someone writes letters backwards and, in some cases, that’s true. But, it’s much more than that. Dyslexia is a language-based learning disability, particularly with written language. One characteristic of Dyslexia is an extreme difficulty with phonics which makes sounding out words tedious and, in some cases, near impossible. And so, my daughter learned that, yes, she has Dyslexia but also that we were working on reading skills.
My daughter also has Epilepsy. This is another condition that is widely misunderstood. The prevailing thought by those unfamiliar with Epilepsy is that every person that has it has Grand Mal seizures and that they will try to swallow their tongue. In actuality, there are many types of Epilepsy and most of them do not consist of thrashing around trying to swallow tongues. My daughter never had those types of seizures; in fact, most people never knew she was having them. She takes medication for Epilepsy so I was able to show her that we were taking care of that, too.
By the time we finished our conversation about “Being Normal”, I think she understood the message. Nothing she had was not being treated in one way or another. When she goes to OT for fine motor deficits, she sees other people with their own struggles. My goal is two-part: I want her to know we are doing everything we can to help her and I want her to know she’s not alone.

“Normal” is a fallacy. There are those who may try to represent that they are normal but when you scratch the surface, the imperfections show through. It’s my belief that some will say they are Normal to make others feel bad about themselves or even defective. It’s the part of us that isn’t “Normal” that gives us the uniqueness that makes us the individuals we are. Owning up to our humanness and our fallibility is what makes us the most beautiful of all.