Special Needs Parenting :: The Bullied and the Bystanders - by Carey Nelson Handley 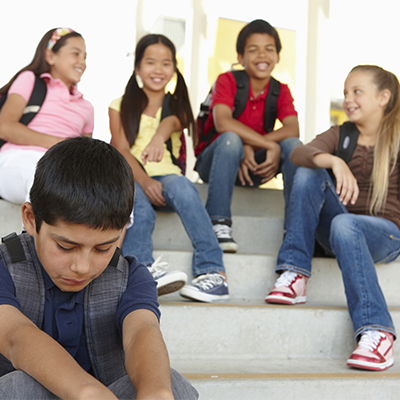 There are few of us who can say they’ve never been bullied. Many of us learned to deal with taunts and harsh remarks when we were young, although as adults we sometimes may still feel the sting. A lot of us grew up with a group of friends who acted as buffers and had a support system that gave us strength in numbers. And, with some exceptions, most of us outgrow being bullied as we, and our tormentors, grow older.

For our children with Special Needs, bullying may last longer and take other forms than ours did in childhood. They may not have peers to stand by their side and, even if they do, it’s quite likely their peers are similar to them in many ways and ill-equipped to handle their own bullies let alone help a friend who is being bullied.

Several memories stand out from my daughter’s childhood years and I find gratitude in the fact that although I remember them in vivid detail, they have been erased from her memory.

Our daughter spent only 2 1/2 years in public school before being moved to a series of schools for children with Special Needs. While in public school second grade, I found out that at lunch, some boys encouraged her to eat some of their crackers which I am sure she looked at favorably as they were paying attention to her. This made me happy until I heard that they had first sucked on the crackers before giving them to her to eat. Even though I was not there at the time, I could visualize them laughing at her naïveté and figuring out how they could next humiliate her.

There were other acts that I remember: my daughter being called the “R” word by a boy on the block who then blamed it on another child. The girl on the block who she had played with for years but was suddenly never available to play with her although she played with others instead. The time when she was in a bookstore and was teased for how she showed excitement for being there.

Many parents of children with Special Needs have similar stories. It’s hard to watch our children go through this without knowing how to handle it or having the strength to know they’ve done nothing wrong.

Compassion for those who are different is something that is not taught nearly enough - whether at home or in school. Having the fortitude to stand up for the weak is rare but when it occurs, is exhilarating.

There was a time when our daughter asked two girls on the block to play with her after school and one said she couldn’t because she had to go home - right before she turned to the third girl and asked her to play. The third girl’s mother was nearby and explained to the other girl that if she couldn’t play with our daughter because she seemingly had to go home, then her daughter wouldn’t be able to play with her either. This mother’s attitude was a huge asset to what she was teaching her daughter and our daughters became great friends until they had to move a year later.

All our children want is kindness. All they need is acceptance. While I recognize that the chasm in our daughter’s development versus her same age peers is huge now and eliminates her from their worlds, it wasn’t as noticeable when she was young. As parents, we are caught between wanting to intevene and not wanting to make things worse. That’s true of all parents, not just those with children like mine. Showing compassion is free but the dividends received by children who have challenges pays interest for many years to come.